Reelviews #3: Seven Days in May 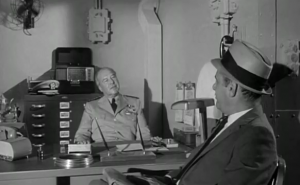 This man is not about to yield to the junior service.

“Seven Days in May”, of 1964, (dir. John Frankenheimer, from Rod Serling’s screen adaptation of the novel) tells a story of inter-service rivalry in the middle years of the Cold War. Burt Lancaster plays USAF Gen. James Mattoon Scott, appointed to the Chairmanship of the Joint Chiefs of Staff by deeply unpopular President Jordan Lyman (Frederick March) in a calculated affront to the Navy Department. The Navy is able to maneuver Lancaster into attempting an ill-conceived coup by playing to his vanity, before undermining him (and, as a bonus, the other service chiefs) with a suspiciously well-timed confession delivered by VADM Barnswell (John Houseman). A misguided romantic subplot does not detract from this subtle tale of political intrigue.