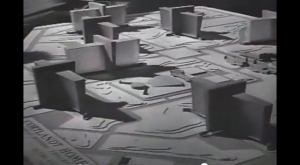 In 1949’s “The Fountainhead”, Gary Cooper plays Howard Roark, a brilliant engineer and terrible architect. Roark offers a Faustian bargain to the city of New York; he will solve their most pressing civil engineering problems, but only on condition that they permit him to ruin their skyline. When the city fathers attempt to renege on the deal, Roark’s revenge extracts a terrible toll on both the city at large and those closest to him. From a screenplay by Ayn Rand, adapting her own novel.