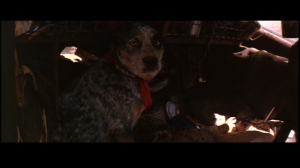 A loose adaptation of “Death of a Salesman” (Arthur Miller, 1949), 1981’s “The Road Warrior” (dir. George Miller) follows the adventures of door-to-door pet salesman Max Rockatansky (Mel Gibson) in the Australian outback of the early 1980’s. While the basic structure of a man failing at his profession (most of the people Max meets react to him rather violently) while worrying about his family’s welfare (in Max’s case, a son with a severe case of being dead) is retained, many changes were made to accommodate the new era and setting. There are, of course, a lot more guns and a lot fewer chamois cloths, and the phantasmal character of Uncle Ben is replaced with the flesh-and-blood Gyrocaptain (Bruce Spence) — who may not own a diamond mine, but does have a trained attack snake. Most controversially, Miller’s film diverges from Miller’s play in the third act, as Max survives his final crash.