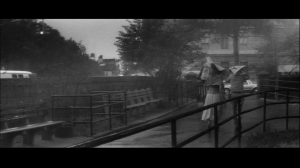 Every year, one or two people get killed during an electrical storm in Central Park.

Woody Allen’s 1979 “Manhattan” is, perhaps, one of cinema’s greatest misfires. Famously so hated by its auteur that he offered to forgo his director’s fees on his next project if UA would shelve the film, it illustrates how even the most talented cast and crew can still produce a debacle. Intending to create a harsh critique of late-70’s New York City misgovernance, Allen reunited with DP and “prince of darkness” Gordon Willis to shoot the film in a gritty B&W style. Unfortunately and incomprehensibly, the project was let down by a silly romantic subplot, and became a deeply disingenuous movie that suggested that Manhattan might be an interesting and picturesque place to live.